The little town of Sweetwater, located on the edge of the Everglades along the Tamiami Trail, is known as a place that floods often. Did you know it was Russian midgets that first settled the area?

The history of Sweetwater actually began during the Florida land boom of the 1920s when the Miami-Pittsburgh Land Company purchased acreage and laid out the original plat of “Sweetwater Groves.” However, the 1926 Hurricane and subsequent South Florida real estate “bust” put an abrupt end to the development venture. 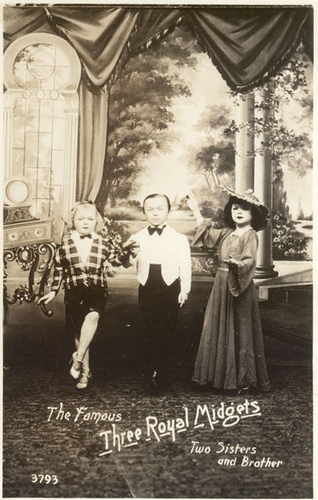 The Royal Midgets of Sweetwater

In 1938, Clyde Andrews acquired most of the “Sweetwater Groves” tract and began to market lots. Among his buyers was a troupe of Russian midgets seeking a place to retire after a career with the circus. They built several mini-scaled homes suited to their needs. For years, Sweetwater was known as the “midget” community.

According to a story in the Miami Herald: A colony of Russian-born circus midgets heading out of Miami, after a show in 1939, drove a few miles along the Tamiami Trail then abruptly hit the brakes. The mile-long strip of land they admired would soon be their new home.

The “Royal Russian Midgets” bought the land advertised as “Sweetwater Groves” in 1940 from developer Clyde H. Anderson. The circus performers had big plans, including creating a tourist attraction on the 100-acre plot, but their plans fizzled as World War II approached.

From that inauspicious start, Sweetwater, which sits just north of Florida International University’s main campus off Southwest Eighth Street, has blossomed into a small city in western Miami Dade, with 19,000 residents, 14 shopping centers, including the Dolphin Mall, and more than 600 businesses. About 94 percent of the population is Hispanic, with the biggest concentration belonging to the Nicaraguan community.

The growth, however, has been tempered with problems at City Hall.

The city’s former mayor, Manuel Maroño, was sentenced to more than three years in prison by a federal judge who admonished him for accepting bribes as the mayor of Sweetwater. His right-hand man, Jorge Luis Forte, was sentenced to one year in prison. The two had pleaded guilty to fraud charges involving $60,000 in kickback payments, stemming from an FBI sting that revolved around a “sham” federal grant program that prosecutors say was designed to line the pockets of Maroño, Forte and others.

“The arrest coincided with a number of investigations in the city that frankly kept Sweetwater in the news in an unflattering manner,” said Mayor Jose M. Diaz. “It was a shock to the residents and the city in general.”

When asked what he and the commissioners are doing to restore the city’s name, Diaz said, “I personally have been working to bring greater transparency and fiscal responsibility to our city government. Good government and good policies are key factors in restoring faith in government regardless of size and budget.”

Sweetwater incorporated as a city in 1941 with a population of 25 people. Miami is the Seminole Indian word for “sweet water.”

The new town’s first mayor was Joe Sanderlin, the midgets’ guardian and manager. By 1959 Sweetwater had attracted 500 residents and contained a town hall, church, grocery store, service station and 183 homes. It also had a two-man police force and a volunteer fire department. In 1970, Sweetwater was still a relatively small community of about 3,000 residents.

During the 1970’s, however, several events were to happen which would dramatically change the hitherto “sleepy little country town” of Sweetwater forever. These events included the establishment of a major new state university to the south, the construction of the two major expressways to the north and west, and the discovery of Sweetwater by Dade County’s Hispanic community.

The growth and development which was precipitated by these occurrences caused Sweetwater to more than double in population and lead all other Dade cities in growth during the 1970s.