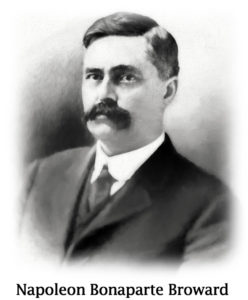 Broward County was founded on October 1, 1915. It was named for Napoleon Bonaparte Broward, remembered for his campaign to drain the Everglades and turn the vast swamp into “useful land.”

It was originally intended to be named Everglades County, but then-Speaker of the Florida House of Representatives Ion Farris amended the bill that established the county to be named after Broward.

Following William S. Jennings , Broward was the 19th Governor of Florida, holding the office from January 3, 1905 until January 5, 1909.

He was born April 19, 1857 in Duval County and died October 1, 1910 (aged 53) in Jacksonville, Florida. Broward was an American river pilot, captain, and a leading politician of his era.

Broward spent his childhood on a series of family farms along the St. Johns River in Jacksonville; during the Civil War the original farm was burned by Union troops that occupied the town.

Broward first worked on the river with this uncle, doing odd jobs during the summer on his uncle’s steamboat during the summer. In 1876, having graduated high school, Broward became a ship’s mate and traveled to New England. He stayed in that region for two years, working on ships up and down the New England coast. By 1885 he was back on the St. Johns, piloting his father-in-law’s steamboat Kate Spencer.

Broward established his reputation as a good pilot and captain. In January 1888, a major prison break disgraced the city’s sheriff, and he was removed from office. The county Democratic leadership got together to nominate a new sheriff, and quickly settled on Broward as the best man for the job. The governor appointed him to the post on February 27. In less than a month, he gained statewide notoriety for breaking up gambling operations in the city.

In the early 1890s, the Democratic Party in Florida was undergoing some internal strife. Two factions developed in Jacksonville that eventually became the major statewide camps, the Antis and the Straightouts. The Antis were conservative and pro-business, whereas the Straightouts were allied with Populists and agrarians. Broward joined the Straightout camp.

Broward was approached by a prominent member of Jacksonville’s Cuban community about shipping a load of munitions and some Cuban expatriates from Nassau to Cuba. Broward agreed, and in January 1896, The Three Friends shipped out of Jacksonville on her maiden voyage, bound for Cuba.

In 1900, Broward accepted the Democratic nomination for the State House and was elected almost without opposition.
Broward did not run for the House again in 1902, because he was busy with a salvage operation in the Keys.

During the summer of 1903, he decided to run for the governorship. Broward’s biggest push as governor was for drainage of the Everglades, then considered useless swamp, as people did not understand its ecology or relation to water table and habitat. Eventually he brought President Teddy Roosevelt down to the Glades for a trip through the drainage areas. Roosevelt was an avid supporter of drainage and became an important advocate for the program.

Today, few residents of Fort Lauderdale and the numerous small cities of Broward, are aware of the man who’s name is ingrained in their county.

Perhaps even fewer would advocate his misguided campaign to drain the Everglades, a unique environment that sustains the critical water supply for millions of homes and businesses — and draws visitors from across the globe.