Often called the third worst disaster in American history, the horrific 1928 Okeechobee hurricane was one of the deadliest tropical cyclones in the recorded history of the North Atlantic basin. In South Florida, at least 2,500 people drowned, while damage was estimated at $25 million. Overall, the system caused $100 million in damage and at least 4,079 deaths.


The fourth tropical cyclone, third hurricane, and only major hurricane of the 1928 season, this system developed just offshore the west coast of Africa on September 6. Initially a tropical depression, it strengthened into a tropical storm later that day, shortly before passing south of the Cape Verde Islands. 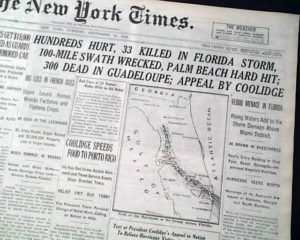 Newspaper headlines greatly underestimated the death and destruction from the 1928 Okeechobee Hurricane. Overall, the system caused $100 million in damage and at least 4,079 deaths.

Throughout the island of Puerto Rico, an estimated 24,728 homes were destroyed and 192,444 were damaged, leaving over 500,000 people homeless. Heavy rainfall also led to extreme damage to vegetation and agriculture. On Puerto Rico alone, there were 312 deaths and about $50 million in damage.

Early on September 17, the storm made landfall near West Palm Beach, Florida with winds of 145 mph, destroying more than 1,711 homes.

When the worst of the storm crossed the lake, the south-blowing wind caused a storm surge to overflow the small dike that had been built at the south end of the lake. The resulting flood covered an area of hundreds of square miles with water that in some places was over 20 ft deep. Houses were floated off of their foundations and dashed to pieces against any obstacle they encountered. Most survivors and bodies were washed out into the Everglades where many of the bodies were never found. Agricultural losses in the area surrounding Lake Okeechobee were also significant, with virtually all crops destroyed and over 150 tractors suffering damage.

Numerous houses and buildings were swept away in the cities of Belle Glade, Canal Point, Chosen and Pahokee. In South Bay, nearly all houses were destroyed and several buildings were un-roofed. At least 160 fatalities occurred in the city.

In Boca Raton, two garages and several houses were destroyed. At the Cloister Inn, windows were shattered and the roof was damaged; across the street, 32 freight cars belonging to a train along the Florida East Coast Railway were tossed by the wind into a nearby ditch.

In Lake Worth, approximately 50% of homes were damaged or destroyed, while 75% of buildings in the business district suffered damage.

In Boynton Beach, about 75% of businesses suffered complete destruction. Fifteen people were injured by a roof collapse while taking refuge in the auditorium of a high school.

In Florida, although the hurricane destroyed everything in its path with impartiality, the death toll was by far highest in the economically poor areas in the low-lying ground right around Lake Okeechobee, such as Belle Glade, Chosen, Pahokee, South Bay, and Bean City.

To prevent a recurrence of disasters like this one and the Great Miami Hurricane of 1926, the Florida State Legislature created the Okeechobee Flood Control District, which was authorized to cooperate with the U.S. Army Corps of Engineers in flood control undertakings.

After a personal inspection of the area by President Herbert Hoover, the Corps drafted a new plan which provided for the construction of floodway channels, control gates, and major levees along Lake Okeechobee’s shores. A long term system was designed for the purpose of flood control, water conservation, prevention of saltwater intrusion, and preservation of fish and wildlife populations. One of the solutions was the construction of the Herbert Hoover Dike.

Today, the dike — in some places more than 30 feet tall — obscures the natural view of the lake. Several parks and recreation facilities are build inside the dike, with limited road access that crosses over.