One of more unusual pioneer groups to settle in South Florida is memorialized at the Koreshan State Historic Site, near Corkscrew Swamp.

Cyrus Reed Teed was an eclectic physician whose experiments in alchemy often involved dangerously high levels of electricity. In one such experiment in 1869, Teed was electrocuted so badly that he blacked out. It was during this period of unconsciousness that Teed insists a “divine illumination” occurred.

In this alleged mystical experience, Teed believed that God, in the form of a beautiful woman, divulged all the secrets of the universe and urged him to use his scientific knowledge to interpret the Bible. Though many believed that Teed’s experience was more a result of brain damage than divine intervention, Teed dramatically changed his life to fit his new calling. 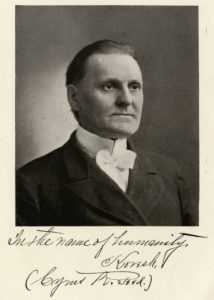 In the years that followed, Teed changed his name to Koresh, the Hebrew name for Cyrus, and began building the fundamental theories for his new religion, Koreshan Universology, or Koreshanity. Of Teed’s pseudoscientific theories, there was one that became the core tenet of Koreshanity: Cellular Cosmogony, the belief that the universe exists inside a giant, hollow sphere.

Similar to other Hollow Earth theories, Cellular Cosmogony posited that humans lived inside—rather than on the surface of—the Earth, and were held there by centrifugal force, not gravity. Moreover, Teed believed that the universe also existed inside this sphere, and that the Sun was an electromagnetic battery-operated helix.

For the next few decades, Teed formed small Koreshan Unity groups around New York, Chicago and San Francisco. Even still, Teed fantasized about forming the “New Jerusalem,” a utopian city built on 400-foot wide streets and consisting of 10 million citizens . Eventually, Teed decided to build his utopia in the small town of Estero, Florida, and he and his followers moved south in 1894.

Unfortunately, the “golden age” of Koreshanity was between 1903-1908, at a maximum membership of only 250 people. During this time, however, the Koreshans built extensively, erecting a bakery, printing press, and their own “World College of Life.” Additionally, the Koreshans created their own political party and built their own power plant, providing electricity to surrounding towns years before the technology was available to the region.

Teed died in 1908 after being pistol-whipped during an altercation with locals. His death was blamed on this altercation, however, there has never been any crdible proof that this was the cause of his death. His death certificate states that he died of a circulatory ailment. After his death, the Koreshans left his body in a bath tub in hopes that his spirit would be resurrected. Though reincarnation was a central belief in Koreshanity, Teed’s spirit never rose, and local health officials eventually demanded a proper burial.

The membership quickly declined, led by roughly three dozen members for the next thirty years. The last surviving member of the Koreshan Unity was Hedwig Michel, who fled Nazi Germany and came to Estero in 1940. Michel spawned a brief Koreshan revival for the next two years, opening up a Western Union and a gas station; however, with only four members left by 1960, she ceded the three hundred acres of land to the State of Florida in 1961. 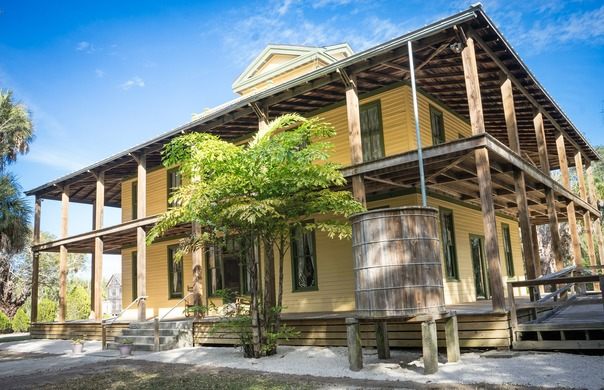 At the Koreshan State Historic Site near Corkscrew Swamp, the Koresh Yellow House is preserved as a reminder of this strange pioneer cult group that believed the universe exists inside a giant, hollow sphere.

Today, the area is a historic site and state park. Many of the buildings are still preserved, including the “Planetary Court,” where Michel lived until her death in 1981. Visitors can see her grave, the only Koreshan grave on site, as well as browse the extensive landscaping on the grounds. A Monkey Puzzle tree, which drops football-sized seeds, and a number of Sausage trees are among some of the exotic plants that the Koreshans imported to Florida.