The first automobile in Dade County?

From the 1910 Florida Automobile Registration Records, evidence of my great grandfather’s 30 horsepower 1908 Maxwell Roadster (serial number 7338). According to family lore, EDV Burr owned the first automobile in Dade County. In searching these records, I found no other registrations in Dade County in 1910.

Maxwell was one of the big three auto manufacturers at the time. Does anyone remember Jack Benny’s old car, the one that served the purpose of proving how cheap he was? It was a 1910 Maxwell as I recall. 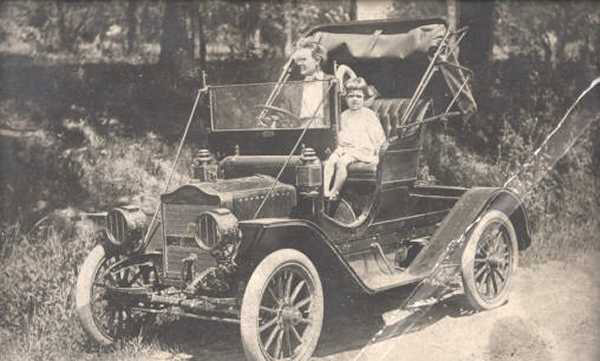 One hundred years ago, EDV Burr served as the chairman of the Dade County commission, championing and overseeing all the major roads built in the area, turning South Florida from a disparate group of small pioneer settlements to a vast metro area, poised for growth in the boom era of the 1920s.

The following is excerpted from “Bun” — the story of Edward DeVere Burr, Florida Pioneer, Chairman of the Dade County Commission. Facts, legends and rumors as told to great-grandson Robert Adams Burr.

Another seminal event that occurred in October of 1915 was the suggestion of building a road westward across the everglades. The Miami-Marco portion of the Tamiami Trail was a grandiose project that would require years of work and large sums of money in an effort to better connect Dade County to other growing population centers in Florida. The name is derived from the route it would span — Tampa to Miami.

Even more critical to Bun Burr was the eastern route along the coast of Dade County, soon to be named East Dixie Highway. This newly paved path linked the settlements of Lemon City, Little River, Biscayne and Arch Creek through Burr’s district, as well as the upstart sub-divisions known as Fallasen Park, Elmira, Acadia, Biscayne Heights and Aqua Vista. This eastern road, built on a high ridge, also allowed wonderful views of Biscayne Bay and was the preferred route for travelers visiting the area by car.

By contrast, West Dixie Highway, the original military trail that linked Ft. Lauderdale with Ft. Dallas on the Miami River, passed through a number of low lying prairies and was subject to flooding all too often.

The distinctly raised coral ridges that define the eastern and western coasts of Florida, were long used by indigenous settlers who created foot trails on the high ground. Later, modern pioneers expanded these paths into trails and roads along the high ground that rarely flooded, known locally as the reef.

The route south of Miami and Coconut Grove, now dubbed Ingraham Highway as it was improved by modern road-building techniques, was further enhanced by erecting a proper concrete bridge over Snapper Creek, allowing travelers to reach all the way to Royal Palm Park and beyond in the Southern Everglades.

Not a commission meeting went by that a number of roads were not requested to be declared as public highways, to be constructed to the standards set by the commission and maintained in perpetuity for the benefit of the public. When citizens would petition the commission for such roads, a group of viewers would be appointed by the commission to evaluate the route and report back their findings. These connecting series of roads allowed farmers to get their crops to market before spoiling, increased the value of land surrounding them and raised the tax roles of a fast-growing Dade County to the greater benefit of the public.

Roads were largely built with the labor of state and county convicts. Dade County operated several convict camps at this time and the inmates were designated to work on projects specified by the commission. Convicts could also be leased to landowners and construction companies, but owing to the urgent need for road building, the commission generally preferred to prioritize their use for public projects.

The county commission at this time, made a priority of purchasing the latest road building equipment, replacing out-dated stream driven tractors and rollers with modern gasoline powered units, which were kept busy at all times improving the public roads.