John W. G. Seybold was one of the fourteen original founding members of the Miami Pioneers historical society back in 1936. 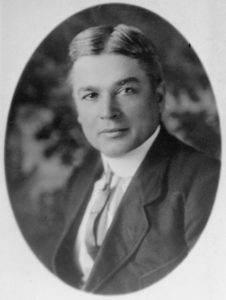 John Seybold immigrated to the US in 1889. Prior to settling in the Miami area, Seybold traveled to Jacksonville, Palaka, and eventually, Palm beach, where he owned and operated a bakery.

John and family relocated to Miami to expand their fortune.

It wasn’t until 1913 that the downtown building on East Flagler was named after the original owner, John Seybold. Originally this building was only three stories. The main floor housed The Seybold Baking Company — with John as Vice President — a popular bakery and ice cream parlor frequented by Miami residents and visitors.

Years later, Seybold added additional stories to the building and it became known as the Seybold Arcade. With ten floors, it was one of Miami’s most prestigious business addresses. Having these additional floors attracted many local business owners to this landmark edifice and the Seybold building quickly became a premier shopping destination.

The first jeweler moved in the building in 1960 — Buchwald Jewelers from Atlantic city. A number of New York jewelers followed suit. At the same time, more than a few Cuban jewelers fled their island during the exodus of the 1960s and set up shop in the Seybold building. By the 1970s, the building become almost exclusively a location for the jewelry trade.

Seybold had additional interests in the city. He was involved in real estate and became a successful developer.

He purposely insisted that the leafy foliage be preserved to allow for cool shade for the homes in this unique enclave. Today, giant banyan and oak trees provide copious shade for the grand old single-family homes built in Florida vernacular and Victorian styles.

Sprig Garden is significant architecturally for its wealth of early Frame and Masonry Vernacular, Mission, Bungalow, and Moderne style houses that reflect the diversity and evolution of architectural design in South Florida during the early twentieth century.

The Wagner Creek on the north fork of the Miami River was widened and renamed Seybold Canal. A silent motion picture “The Jungle Trail” was filmed in this neighborhood in 1919.

Seybold was so impressed with the construction of The Hindu Temple prop used in the movie production, that he had a duplicate home built to reflect this ornate style. The home still stands today.

Seybold was also one of the founders of the Masonic Scottish Rite Temple as well.

John Seybold had three wives. His first wife is buried in Jacksonville. Later, his daughter, Olive Gertrude Seybold Moore Sault chose to be buried next to her mother. John’s second and third wives are buried in Miami, along with his two sons — both named John.

John Seybold leaves a legacy of commercial success and community service during the developing years of Miami. His contributions to the growth of Miami during the formative pioneer and boom time years are notable.