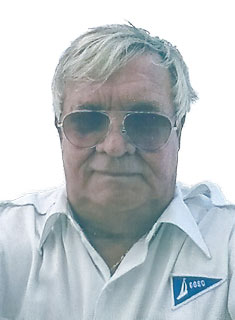 Local history enthusiast Renny Young returns with a program about the history of the Coconut Grove Sailing Club for members and friends of the Miami Pioneers and Natives of Dade, on Sunday, March 7th at 2pm, via Zoom online video.

A Short History of the Coconut Grove Sailing Club

In December of 1945 a meeting was held at Dr. Paul Robertson’s home on Saint Gaudens Drive in Coconut Grove. About 30 people (men, women and boys) gathered to form a youth membership club to promote sailing, racing and water safety.

The club was titled the “Coconut Grove Sailing Club.”

The first Rear Commodore was a teenager who became a dentist and is still a lifetime member — Dr. Don Smith. Women and teenagers were permitted to be full members, which was unusual at that time.

The members met at different homes and then were allowed to have their meetings at the coconut grove elementary school on Grand Ave.

During 1946, plans were made to place a clubhouse on leased property from the city of Miami which was the northeast corner of Peacock Park. A small prefabricated building was found and erected by the sailing club members in one weekend on the leased property.

The small clubhouse survived with additions until 1982. The city was pressuring the club to build a new clubhouse and catch up on tardy lease payments.

The original purpose of promoting youth sailing still exists and is in full swing — even with the present COVID pandemic situation — as the Coconut Grove Sailing Club celebrates its 75th anniversary.