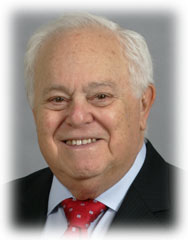 As a teenager, Gerald’s family moved from New York to Miami in 1947. He graduated from Miami Beach Senior High School and attended the University of Miami where he received the bachelor’s degree in business administration and the juris doctor degree in 1954.

A distinguished legal career lead him to the Dade County State Attorney’s Office where he rose to the rank of chief prosecutor of the Homicide and Capital Crimes Division.

In 1980 he was appointed a circuit judge in Florida’s Eleventh Judicial Circuit. In 1984 he was appointed administrative judge of the Criminal Division, and he served in that capacity until his appointment to the Florida Supreme Court in January 1987.

Justice Kogan retired from the Court on December 31, 1998, and returned to live in Miami.

The meeting takes place on Sunday, December 3rd at 2:30pm at the Community Room of the Central Christian Church at 222 Menores Avenue in Coral Gables.