Our special guest is Jason Vuic, author of The Swamp Peddlers: How Lot Sellers, Land Scammers, and Retirees Built Modern Florida and Transformed the American Dream. 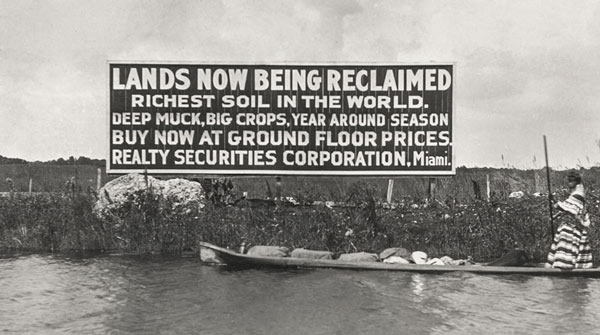 Florida has long beckoned retirees seeking to spend their golden years in the sun, but, for many, the American dream of owning a home there was financially impossible. That changed in the 1950s, when the so-called “installment land sales industry” seemingly appeared out of nowhere to hawk billions of dollars of Florida residential property, sight unseen, to retiring northerners. For only $10 down and $10 a month, working-class pensioners could buy a piece of the Florida dream: a graded homesite that would be waiting for them in a planned community when they were ready to build. The result was Cape Coral, Port St. Lucie, Deltona, Port Charlotte, Palm Coast, and Spring Hill, among many others – sprawling exurban communities with no downtowns and little industry but millions of residential lots.  As Jason Vuic recounts in this fascinating presentation, these communities allowed generations of northerners to move to Florida cheaply, but at a price: High-pressure sales tactics begat fraud; poor urban planning begat sprawl; developers cleared forests, drained wetlands, and built thousands of miles of roads in grid-like subdivisions, which, 50 years later, played an inordinate role in the 2008 subprime mortgage crisis.

Originally from Punta Gorda, Florida, Jason Vuic is a writer and historian from Fort Worth, Texas.  He is the author of several books, including The Swamp Peddlers: How Lot Sellers, Land Scammers, and Retirees Built Modern Florida and Transformed the American Dream (UNC Press, 2021), The Yucks! Two Years in Tampa with the Losingest Team in NFL History (Simon and Schuster, 2016) and The Yugo: The Rise and Fall of the Worst Car in History (Hill and Wang, 2010).